How many cups in a quart? Calculator.

There are four cups in a quart, but...

What is a Cup?

This article is about a cup as a measuring unit of volume. Not to be confused with drinking cups, a small open container used for drinks, which may not correspond with this unit, because, they can come in all shapes and sizes. The cup used for measurements is the so-called, measuring cup. It is a measuring resource for measuring liquids and solids like sugar, powders, etc. It is used mainly in cooking. Drinking cups may vary greatly in size. That is the reason why standard measuring cups are usually used.

There are three main standard measuring cups. They are:

The US customary cup

The US cup equals to about 237mL (236.5882365 precisely) or half of a US liquid pint. This cup is used widely in the United States, but not in other countries. The cup used in the US for nutrition labeling is defined in law as exactly 240 mL.

The US dry cup

The customary dry cup is equal to 1.165 liquid cups. It is not used frequently used. In practice, there isn't a "dry cup", instead it is used the liquid cup for dry measures. Thus, if we divide the volume of a dry quart by the volume of a "liquid" cup we'll find that one US dry quart equals 4.65 cups (approx.).

The old Imperial cup equals measuring 284 mL, is not commonly used today. Instead, Great Britain uses the metric cup of 250mL. In fact, solid ingredients are measured by weight, rather than volume.

The measuring cup used in Australia and New Zealand equals 250ml. Australian and NZ cooking also uses the coffee cup also known as Tasse à café, which mesures 150 millilitres or 5.07 US fluid ounces, is sometimes used in recipes. It is also used to specify coffeemaker sizes. A 12-cup US coffeemaker equals 57.6 US fluid ounces of coffee, or 6.8 metric cups of coffee.

Canada now usually employs the metric cup of 250 mL but its conventional cup was somewhat smaller than both American and imperial units.

In Latin America, the cup (Spanish: taza or vaso; Portuguese: xícara) isn't a standard. It varies according to the country. Sometimes, in the same country, the 200 mL and 250 mL cups and even the US cup customary one are used.

urrently, in Japan, the standard cup measures to 200 mL. Althought the gō, similar to a cup, which has a volume of 180.4 mL, is still used for measuring sake and rice.

What is a Quart?

The original quart was an old English unit that varied between 0.95 and 1.16 liters. Its name derives from the ancient French word 'quarte', meaning 'fourth'. Hence, a quart is one-fourth of a gallon.

The quart (abbreviation qt.) is a unit of volume derived from the gallon. As there are at least three types of gallons, we have, presently, three kinds of quarts, depending on the gallon from which it derives. Gallons are always divided into four quarts, which are further divided into two pints each. The quart is also referred to as the container having a capacity of one quart.

Once gallons are used for both solid and liquid measurements, we also have the fluid quart for liquid measures and, in the US, the dry quart for non-liquid or commodities measures. There is no dry quart in the UK. The dry units are about 1/6 larger than the corresponding liquid units are.

Quarts measures depend also on the country system of measurement. Therefore, in the U.S. system, we have two units called a quart, one for liquid measure and another unit for dry measure. The British system uses one standard quart, which is equal to two Imperial pints. Below, we will clarify the types of quart currently in use.

The fluid quart or simply quart

There are two different fluid or liquid quarts measurements:

How many cups in quart?

One quart equals four cups. So there are 4 cups in a quart.

It is not so easy to answer this question

Depending on what system of measurement we are concerning, we can have many answers to this question. Below we show some answers.

How many US cups in a US quart?

This is very easy to answer because we are in the same system. By definition, one quart has two pints. As each pint equals two cups, we can surely say that we have four US cups in a quart US quart.

How many UK cups in a UK quart?

The answer to this question could also be very easy because we are comparing units of the same system. Again, by definition, one quart has two pints or four cups, thus we have four UK cups in a UK quart. That is the correct result. On the other hand, the cup used in the UK, nowadays, is the metric cup, which measures 250ml. An Imperial quart equals 1136.5225 mL. So, dividing 1136.5225 by 250, we get 4.54609. Therefore, there are approximatly four and a half metric cups in a UK quart.

How many Canadian cups are in a quart?

How many Australian cups are in a quart?

How many US cups in a US dry quart?

Questions and Answers about Liquid Measurements

Question: Is there a British dry quart?

Answer: The British quart is used for both liquid and dry measures, so there is only one type of quart in the UK.

Question: What is the difference between imperial and US quart?

Answer: The main difference is that the American customary system has two types of quarts: a wet and a dry one. The imperial quart is bigger than each of these.

Question: What is the difference between American and English or Imperial quart?

Question: Is a US quart the same as a UK quart?

Answer: No. The American customary system has two quarts: a wet and a dry one. The imperial quart is bigger than the US quart and is used for both dry and wet measures.

Question: What countries still use the imperial system of measurement?

Answer: Imperial units are still used in the United Kingdom, Canada and other countries formerly part of the British Empire. The United Kingdom uses a mixture of metric and Imperial.

Question: What is 1 cup in ml in the UK?

Answer: In Great Britain, just a type of cup is used for dry and liquid measuements. The UK cup equals 284.14 cubic cm or ml. But the cup currently used in the UK is the metric cup which measures 250mL.

Question: Is the UK cup the same as the US cup?

Question: How many Canadian cups are in a quart?

Answer: Approximately 4 ½ cups. Canada now usually employs the metric cup of 250 mL but its conventional cup [5] was somewhat smaller than both American and imperial units.

Question: What is the abbreviation for a quart?

Answer: The quart abbreviation is qt. (including the dot at the end)

Answer: No. In most cases, four cups equal one quart.

Question: How many cups is a quart of water?

Answer: There are four cups in a quart of any liquid, like water, milk, ice cream and so on.

Question: How many cups are in a gallon?

Answer: There are 4 quarts, 8 pints, or 16 cups in a gallon. But, the Imperiasl gallon contains 20 traditional Candian cups (see details above on this page).

The following questions are answered in a simplified way. To get more accurate values, use our calculator. For more details, read this article.

Question: How many quarts in a gallon?

Answer: There are 4 quarts in a gallon

Question: How many pints in a quart?

Answer: There are 2 pints in a quart of the same system of units.

Question: How many cups in a pint?

Answer: There are 2 cups in a pint, but this is not the only answer, see details above.

Question: How many ounces in a fourth cup?

Question: How many ounces in a third cup?

Question: What is the abbreviation for a cup?

Answer: The cup abbreviation in recipes is c.

Question: How many ounces in a half cup?

Question: How many ounces in a three-fourths cup?

Question: How many ounces in one cup?

Question: How many ounces in a quart?

Question: How many ounces in a gallon?

Answer: There are 128 ounces in a gallon.

Video on how to convert liquid units of volume

This image shows visually the relationship between cups and quarts. 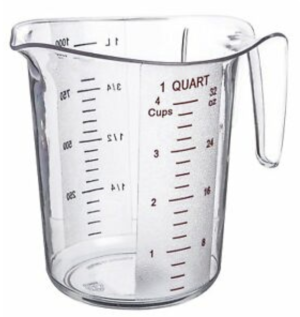 Quarts and cups to other units of measurement

How big is a quart?
US quart conversion

How big is a cup?
US cup conversion

It is a website / web app that tries to help you to convert units of volume.

It is very important to know that the cup used in the USA is different from that used in the UK, once in the UK the metric cup is used. The difference in volume measurements can be quite noticeable when you deal with large quantities. The good news is that, for most recipes, the difference is small and will not affect the finished dish. We hope that this calculator/article can help you convert between all volume units.

The maximum approximation error for the fractions shown in this app are according with these colors:

Units that can be converted using this tool

One to Many Converters

This application software is for educational purposes only. We are not liable for any special, incidental, indirect or consequential damages of any kind arising out of or in connection with the use or performance of this software.